Free Will and Punishment: A Mechanistic View of Human Nature Reduces Retribution

If free-will beliefs support attributions of moral responsibility, then reducing these beliefs should make people less retributive in their attitudes about punishment. Four studies tested this prediction using both measured and manipulated free-will beliefs. Study 1 found that people with weaker free-will beliefs endorsed less retributive, but not consequentialist, attitudes regarding punishment of criminals. Subsequent studies showed that learning about the neural bases of human behavior, through either lab-based manipulations or attendance at an undergraduate neuroscience course, reduced people’s support for retributive punishment (Studies 2–4). These results illustrate that exposure to debates about free will and to scientific research on the neural basis of behavior may have consequences for attributions of moral responsibility.

Free Will: Is Your Brain the Boss of You?

Philosophers have debated for years whether we deliberately make each of the many decisions we make every day, or if our brain does it for us, on autopilot. Neuroscientists have shown, for example, that neurons in the brain initiate our response to various stimuli milliseconds before we’re even aware that we’re taking such an action.

This heady debate has hit a very practical road in the past decade: whether individuals who commit crimes are actually responsible for them. Lawyers have argued in court that if the brain determines the mind, then defendants may not be responsible for their transgressions.

Michael Gazzaniga, director of the SAGE Center for the Study of Mind at the University of California, Santa Barbara, is at the forefront of the research into free will, and its implications in courtroom trials and in the expectations of different societies. His thoughts and proclamations are captured in an engaging video called Free Will, created by Joseph LeDoux, a well-known expert on the emotional brain at New York University. The video is the second in a series he is putting together with director Alexis Gambis called My Mind’s Eye. (The first episode featured Ned Block on the mind-body problem.)

Read the rest of the article and view the video on Scientific American Blogs, or read more about Michael Gazzaniga here. A recurring theme of the evening’s discussion was how to determine which level of analysis – from molecules and genes to brain structures and systems to individuals and social systems – is the most important to consider for understanding the mind.  While all panelists agreed that any discussion of the brain’s contribution to behavior should be embedded within a multi-level approach, there was considerable disagreement around whether the brain’s contribution should be considered privileged or not. END_OF_DOCUMENT_TOKEN_TO_BE_REPLACED 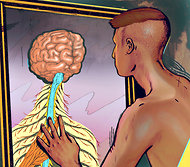