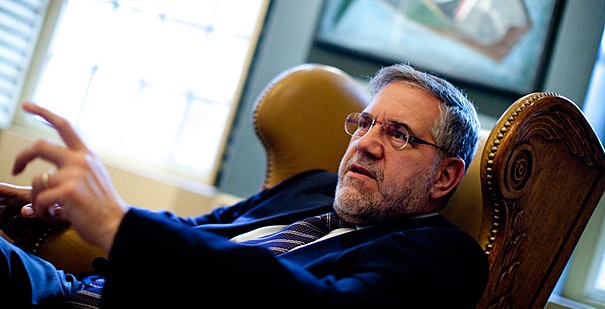 This is a Caption Title

Hyman succeeds Edward Scolnick, the founding director of the Stanley Center, who launched the Stanley Center in 2007 after a distinguished career spanning psychiatric disease research, drug discovery and development, cancer research, and molecular biology. Scolnick will remain a core faculty member of the Broad and will become Chief Scientist at the Stanley Center.

“Steve Hyman is an extraordinary leader who brings remarkable expertise in neuroscience and scientific leadership as well as a deep understanding of the Broad Institute to his new role as director of the Stanley Center,” said Eric Lander, director of the Broad Institute. “Under Ed Scolnick’s leadership, the pioneering efforts of the Stanley Center have been truly remarkable. With Steve’s guidance, the Center will build on this extraordinary foundation to understand the mechanisms of psychiatric disease.”

The Stanley Center’s mission is to decrease the burden of serious neuropsychiatric illnesses by bringing the insights of modern genomics and genetics to bear on neurobiology and therapeutics. It was founded to address schizophrenia, bipolar disorder, and other mental illnesses. With the growing recognition that risk-causing genetic variants extend across multiple disorders of the brain, the center has also taken on the genetics of autism and other developmental disorders. Hyman joined the Broad as a scholar-in-residence at the Stanley Center last June, when he stepped down after ten years as Harvard’s provost.

“I am privileged to assume the leadership of this visionary center created by Ed Scolnick and the Stanley Medical Research Institute,” said Hyman. “Because therapeutics for neuropsychiatric disorders have been stalled for decades, and are being abandoned by many pharmaceutical companies, such an effort has never been more important. I am dedicated to the application of modern genomic and biological tools to understanding these terrible illnesses and, above all, advancing treatment discovery.”

Hyman will continue to serve as the Distinguished Service Professor of Stem Cell and Regenerative Biology at Harvard University, continuing to teach undergraduates, graduate, and medical students at the university.

From 1996 to 2001, Hyman also served as director of the National Institute of Mental Health (NIMH), where he focused on efforts to integrate genetics, molecular biology, neuroscience, and behavioral science into a broader understanding of mental illness.

From 2001 to 2011, Hyman served as Harvard University provost. During that time, he developed collaborative scientific initiatives that span multiple disciplines and institutions, including being a key architect of the Broad Institute.

Scolnick, the founding director of the Stanley Center, will continue to play an important role at the Broad Institute. A physician-scientist who is a member of the National Academy of Sciences, Scolnick served as president of Merck Research Laboratories from 1982 to 2003, where he led efforts to develop 29 new drugs and other therapeutics. He served as the Stanley Center’s director for five years.

“Steve and I have worked together for many years and I have the deepest respect for his commitment to finding the causes of devastating psychiatric illnesses and developing new treatments,” said Scolnick. “He has a keen understanding of the goals of the Stanley Center and the challenges that lie ahead for psychiatric disease research. With his direction, we are in the best position to meet them.”

“Psychiatric illness is a critical area of research, representing an important and unmet need,” said David Altshuler, a founding core faculty member of the Broad, the Institute’s chief academic officer, and a professor of genetics and medicine at Harvard Medical School and Massachusetts General Hospital. “The Broad community is thrilled that Steve will assume leadership of the Stanley Center and that Ed will continue to support and guide the center’s efforts as its chief scientist.”

About the Broad Institute of MIT and Harvard

The Eli and Edythe L. Broad Institute of MIT and Harvard was founded in 2003 to empower this generation of creative scientists to transform medicine with new genome-based knowledge. The Broad Institute seeks to describe all the molecular components of life and their connections; discover the molecular basis of major human diseases; develop effective new approaches to diagnostics and therapeutics; and disseminate discoveries, tools, methods and data openly to the entire scientific community.

Founded by MIT, Harvard and its affiliated hospitals, and the visionary Los Angeles philanthropists Eli and Edythe L. Broad, the Broad Institute includes faculty, professional staff and students from throughout the MIT and Harvard biomedical research communities and beyond, with collaborations spanning over a hundred private and public institutions in more than 40 countries worldwide. For further information about the Broad Institute, go to www.broadinstitute.org.

Post Views: 45
« Previous: The Right to Be Forgotten
Next: Neuroscience and the Pursuit of Justice »