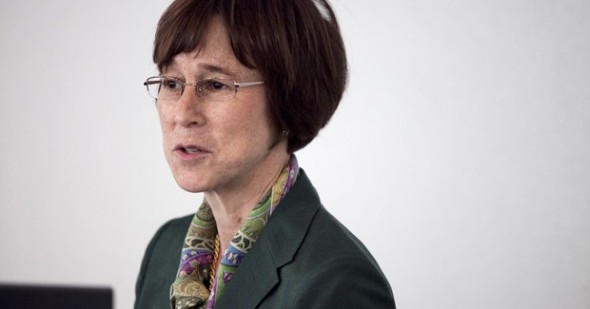 Neuroscience and the Pursuit of Justice

Dr. Judith Edersheim, co-founder and co-director of the Center for Law, Brain and Behavior at Massachusetts General Hospital, explores how neuroscience can enhance the pursuit of justice.

“If neuroscience could shed light on mental states, it might be able to illuminate whether someone meant the crime or intended to harm someone,” Edersheim told approximately 200 students, faculty, staff and community members who filled Northeastern’s Raytheon Amphitheater on Tuesday for the 13th annual Francine and Michael Saferstein Memorial Lecture in Forensic Science.

The lecture series — which is co-sponsored by the Barnett Institute of Chemical and Biological Analysis and the School of Criminology and Criminal Justice — was established by forensic scientist Richard Saferstein in memory of his wife and child, who were killed in 1978 when a bomb discharged inside the family’s garage.

Barry Karger — the James L. Waters Chair in Analytical Chemistry in Northeastern’s College of Scienceand director of the Barnett Institute of Chemical and Biological Analysis — introduced Edersheim by praising her for “performing a broad range of psychiatric evaluations in criminal and civil forensic settings.”

Edersheim, who holds both an MD and JD, said “neurolaw” is similar to  “neuropolitics” and “neuromarketing,” in that the field tries to incorporate both neuroscience and psychology into a more established practice.

One’s genetic composition as well as the electrical activity and physical structure of the working brain, she explained, can all be explored to shed light on the question of criminal responsibility.

But Edersheim added a note of caution in taking this approach: If biology single-handedly determines behavior, then the very notion of free will becomes compromised. Technological, procedural, constitutional and deterministic limitations, she said, must all be considered when applying neuroscience to the law.

“The science has to be respected in the community and it has to be peer reviewed,” Edersheim said. “It has to be reliable, reproducible and there have to be known error rates. Judges are gatekeepers and they should keep evidence out that doesn’t meet those tests.”

Edersheim also addressed the constitutionality of neurolaw. If brain scans are examples of involuntary search and seizure or if they force defendants to unwillingly incriminate themselves, then the procedure, she said, could be in violation of the Fourth and Fifth amendments, respectively.

“Thoughts may be subject to constitutional protection,” Edersheim explained, adding that the law and the brain “live in different worlds.”

The law, she said, gives us a set of rules we must abide by, but we must decide as a society whether neurobiological explanations of human behavior should matter when determining criminality.

Edersheim said the Center for Law, Brain and Behavior has an “operational philosophy for the faithful translation of law into neuroscience,” meaning that courtroom use of neurological and biological data should be limited to instances when the science is inextricably and causally linked to a behavior.

Post Views: 31
« Previous: Steven Hyman to lead the Broad Institute’s Stanley Center for Psychiatric Research
Next: Developmental Neuroscience and the Courts: How Science Is Influencing the Disposition of Juvenile Offenders »