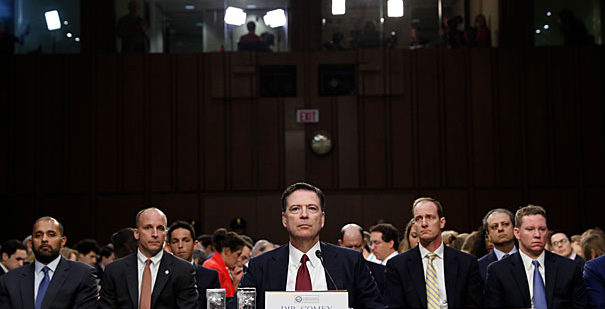 Former FBI Director James Comey told the Senate Intelligence Committee Thursday that he believed President Trump was telling him he should drop the FBI’s criminal investigation into former National Security Adviser Michael Flynn during several private conversations between the two men. Comey testified that the president said he “hoped” Comey would “let this go,” asked him for his personal “loyalty,” and urged him to clear Trump’s name publicly from a broader probe into Russian election hacking.

Comey, who was fired by Trump last month, also stated that he documented the private conversations in contemporaneous, detailed memos — notes of which he said he shared with a Columbia University law professor and friend in an effort to trigger appointment of a special counsel in the Russia case — because Comey was worried the president might “lie” about what the pair had discussed.

In response to Comey’s testimony, Marc Kasowitz, Trump’s personal attorney, denied that Trump had asked for Comey’s loyalty and said the president “never sought to impede” the FBI’s work or directed or suggested that Comey stop investigating “anyone.” Kasowitz accused Comey of being a “government leaker.”

Nancy Gertner, a retired federal judge in Massachusetts who is now a senior lecturer at Harvard Law School, spoke with the Gazette about the legal issues swirling around the matter.

GAZETTE: Does the totality of Comey’s contacts with the president meet the legal standard for obstruction-of-justice or abuse-of-power charges?

In the case of the president, the “act” can be “go easy on Flynn” or “lay off the Flynn investigation.” That clearly is an act that qualifies for obstruction of justice. And in addition, Comey said “I took it as an indication that he wanted me to lay off the investigation.” Here’s a sophisticated player, a former U.S. Attorney, FBI head, who said, “I understood what he was saying, and that’s what he was saying.” So concerned was he about it, in fact, that he did not share it with underlings for fear it would dampen the investigation. It does meet the legal standard for obstruction. The problem is that it’s Comey’s word against the president’s. So it’s not the kind of case that a prosecutor would go forward on without additional information. But in terms of an act that generically fits the standard? Yes, this is an act that fits the standard.

The question is, what was the president’s intent? Was it an aside as they were walking into a meeting? Well no, it wasn’t. The president had talked to Comey about loyalty. It was at a meeting in which he asked everyone else to leave, which is an enormously suspicious thing. That was then followed by a number of conversations about the Russian investigation in general — and remember, Flynn is part of the Russian investigation — and then it ends with Comey being fired and the president says that it’s because of the Russian investigation. At first glance, it does look like there was the intent of shutting down the matter. So when I say these acts and the evidence fit into the category of obstruction of justice, would a prosecutor go forward with Comey v. Trump under these circumstances? No. You’d want to find out: Was this said to others? Hence, today’s testimony. You’d want to find out what else was going on. You’d want to find out what other calls the president made, those kinds of things. But generically, if believed, it certainly qualifies for concern over obstruction of justice.

The difference between this and President Nixon in Watergate is that in Watergate there was a tape. Comey’s contemporaneous notes are very interesting. The FBI’s contemporaneous notes in criminal cases from one end of the country to the other qualify as good evidence of what the FBI agent said or heard. They’re technically hearsay, but they could be memory-recorded. In other words, if you do it the right away, they can come in as an exception to the hearsay rule. In addition, Comey said he spoke to senior leadership at the FBI, so those are people who likely would corroborate that “he said this to me hours after this meeting.” It would be his testimony, his notes, and what he said to others. In any other criminal case, that’s really good evidence. Is it enough when you go up against the most powerful person in the world? Maybe not yet; that’s why it requires further investigation. One other thing that was interesting: Comey said that the president was not then under investigation. But there’s no question that he is now. He is plainly under investigation for obstruction of justice.

GAZETTE: What was your impression of what Comey told the Senate Intelligence Committee?

GERTNER: Comey is an amazing witness, in several respects. He’s a careful lawyer, so he knows what to say. But he’s also an incredible storyteller, an impassioned and clear one. So his account is not told in dry, legal language. He said over and over again that the Russian interference in our election is “a big deal.” That suggests that when Trump hopes to shut down the Flynn investigation, he’s wanting to shut down an important piece of an important investigation. Comey suggests that’s what he’s really saying. This is a major investigation, and Flynn is obviously an important player. And Comey suggests the president is communicating “shut it down.” I was on NPR just now with a Republican operative who kept on saying, “None of this will matter if we pass good legislation.” You have to pause about that. The integrity of the election was undermined? There’s no good legislation that can justify that. There’s no end/means analysis. That’s what Comey kept coming back to: This goes to the integrity of the democracy.

GAZETTE: Did Comey break the law by giving notes of his memos to a friend in order to get them out to the public, as Trump’s attorney Kasowitz seemed to suggest?

GERTNER: I don’t know exactly. They were not classified; he was a private citizen at that point. I don’t think he can be prosecuted for anything. The question of whether that is obstruction of justice is a question of context. The action of releasing this information was incredibly self-protective. I don’t think there is anything illegal.

GAZETTE: Impeachment is, of course, a political procedure, not a legal one. Is there a legal remedy available if a sitting president is accused of a federal crime allegedly committed while in office?

GERTNER: No is the answer. There are some scholars who might disagree, but the overwhelming position of scholars who study American constitutional law say that the only way of addressing presidential misconduct is through impeachment. That’s a structural reason, because if the district attorney of Brooklyn indicted the president — first of all, the district attorney of Brooklyn is a part of the executive branch, is part of the president’s tutelage — how disruptive could that be to the national order if individual district attorneys in different parts of the country could suddenly go after him? So, no, the best answer is the only mechanism is impeachment. Now, that doesn’t mean that the president couldn’t be doing things for which, after he left office and the statute of limitations was met, he could be prosecuted. But right now, the only remedy is impeachment. The only remedy for the obstruction of justice part is impeachment. There also are a whole lot of concerns about Trump’s business dealings and the dealings of his family. It’s entirely possible we’ll see cases against family members. There’s no bar under these circumstances.

GAZETTE: Could the president intervene?

GERTNER: This would be a constitutional crisis. The president could actually intervene and pardon his family members and pardon himself. But he couldn’t pardon himself for impeachment. He couldn’t stop an impeachment proceeding by pardoning himself. There are two political problems here. One is the House taking action on impeachment. By the way, as to the June 7 testimony, it’s also the case that the witnesses could arguably be in contempt of Congress. The witnesses had no basis to not answer questions. But contempt of Congress likewise takes a majority vote to charge them with it. So the political process here is a whole separate question.

GAZETTE: If the special counsel finds that crimes were committed by the president himself, but Congress chooses not to take any action, is that the end of the matter?

GERTNER: Yes, that is the end of the matter. There’s no mechanism to charge a sitting president, on the state or federal level. Former President Bill Clinton wound up with a civil case against him, which could continue. So the emoluments challenge is a civil case. Civil cases can proceed. But the president really is immune from prosecution except through the impeachment process, federal or state.

GAZETTE: What role, if any, does the Supreme Court play if a president is found to have violated his constitutional oath of office or if, as the National Security Agency report published by The Intercept this week suggests, the special counsel finds that part of the 2016 election voting tally may have been tampered with by Russia? Does the Constitution address this at all?

GERTNER: The Constitution doesn’t address that. That’s what Bush v. Gore was about. There are two things. In that situation, the Supreme Court would be obliged to look at the bona fides of the election. And that’s a very extreme step. There’d have to be a smoking gun of major proportions, which there doesn’t seem to be. But the Supreme Court has no role with respect to the president except, as with Nixon, they can deal with issues of disclosure of various kinds — should the president turn over this, should the president turn over that — those kinds of issues.

But to challenge the election, there would have to be a smoking gun, like tampering in the voting machines in Wisconsin or Pennsylvania. That’s the level it would have to be, and there doesn’t appear to be any evidence of that. If the integrity of the election is undermined because of fake news, there’s nothing we can do about that except to investigate how and why, and see if federal crimes were involved. If the vote was affected in a meaningful way, that would be different. But there’s no reason to believe that, not from what we know now. It would be an incredible deal to set aside the election. It’s very, very remote.

Judge Nancy Gertner (ret.), is a Senior Lecturer on Law at Harvard University, and the Managing Director of CLBB.

Read the full article, originally published by the Harvard Gazette.

Post Views: 25
« Previous: The Making Of Emotions, From Pleasurable Fear To Bittersweet Relief
Next: 19-Year-Olds Don’t Belong in Adult Prisons »