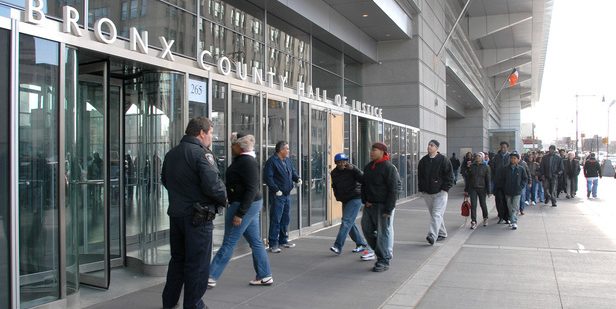 Justice Denied in the Bronx

But to those accused of misdemeanor offenses in the Bronx, a court proceeding is just a hollow ritual. According to the lawsuit filed by The Bronx Defenders, Emery Celli Brinckerhoff & Abady, and Morrison & Foerster, there are few trials, no opportunity to confront witnesses, no way to challenge the government’s case, no opportunity to be publicly vindicated in a speedy proceeding, and unconscionable delays.

For these people, their “day” in court stretches into months, even years, despite their best efforts. They may appear early for court, only to be packed into a courtroom and forced to wait all day for their case to be called. When it finally is, they stand before a judge whose only ruling is to adjourn the case for another day, and then another, and another and another. It is as if the defendant’s time, his or her missed work, lost wages, school absences, child care costs, not to mention the stress and dislocation of pending charges, are irrelevant.

Too often the reason is that there are no misdemeanor courtrooms available to meet the needs. Across the country, policing strategies like Broken Windows and Zero Tolerance have sent a flood of low-level quality-of-life offenses into local criminal courts and, in turn, have decimated their ability to provide trials at all.

For one woman, it was 1,166 days and 33 court dates before the charges against her were “adjourned in contemplation of dismissal.” For Joseph Bermudez, it was 1,258 days and 38 court date before his trial, where he was acquitted. John Carridice waited 1,009 days and had 20 court dates before he was acquitted. In 2015, there were over 45,000 misdemeanor arraignments but only 98 trials, a number that has declined from the years before. The average delay was 642 days for a bench trial, and 827 days for a jury trial.

More often, defendants plead guilty. Rather than claim their constitutional right to a trial, they take whatever steps they can to end the process; they just can’t wait any longer. This is not the reasoned bargain of a well-represented defendant, but the desperate decision of someone who is simply trying to avoid the continuing costs to his life, his work, his family. To call it a “bargain” as in “plea bargain” is absurd. People who plead guilty are pressured by court congestion and seemingly interminable delays. Where there is no realistic or meaningful opportunity to demand a trial—in a system where a person may wait over three years for a trial on a low-level misdemeanor and lose a job in the process—the constitutional underpinnings of plea-bargaining collapse. There is no there there. It is a punishment system, as the complaint says, not a trial system.

The Bronx is the worst of all the boroughs, with far longer delays for trials of any kind than anywhere else. And that dubious distinction is all the more troubling since the Bronx is the poorest county in New York state, and the one with the highest percentage of residents who are people of color.

Making the right to trial meaningful for the thousands of people who are brought through the doors of our criminal courts requires political will, robust and engaged institutions, and adequate resources—not empty promises of change from every level of city and state government, not speedy trial principles honored only in the breach. In the final analysis, courts that are functionally incapable of providing trials in a meaningful period of time for those that demand them are not operating as courts at all. They are merely warehouses for cases, not worthy of our most basic constitutional ideals. And the right to a speedy trial is nothing more than an empty incantation.

Judge Nancy Gertner is a retired US District Court judge, a professor at Harvard Law School, and a CLBB Senior Faculty Member.