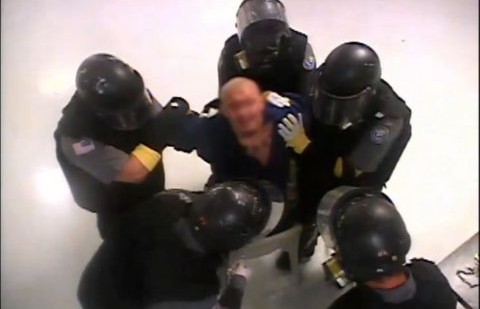 When the video above was filmed, the girl on the bed was 17 years old. For the purposes of this story, I’ll call her Jamie. There was a time when she liked acting in goofy comedy skits at her Detroit church or crawling into bed with her grandmother to watch TV. She loved to sing—her favorite artist was Chris Brown—but she was too shy to perform in front of other people.

Jamie, whose mother was addicted to crack cocaine, was adopted when she was 3. At high school, she fell in with a wayward crowd and started drinking and smoking weed. Since she didn’t always get along with her adoptive mom, she lived with a close family friend from her church whom she referred to as her sister. One fall day in 2011, they got into a bad fight over their living arrangements. The friend told police that Jamie threw a brick at her, hitting her in the chest, and then banged the brick so hard on the front door that she broke the glass mail chute. Jamie denies the assault—and the police report notes that the brick may not have hit her friend—but she admitted to officers that she was “mad” and “trying to get back in the house.” The Wayne County court gave her two concurrent six-month sentences, for assault and destruction of a building.

In a wealthier Michigan county, kids convicted of minor offenses are almost always sentenced to community service, like helping out at the local science center. Doug Mullkoff, a criminal defense attorney in Ann Arbor, told me that prison in such circumstances is “virtually unheard of.” But Jamie is from Detroit, and in January 2012, she was sent to the Women’s Huron Valley Correctional Facility, a prison that holds inmates convicted of crimes like first-degree homicide. From this point onward, her world was largely governed by codes and practices and assumptions designed for adult criminals.

Jamie is 20 now, but her soft brown eyes make her seem younger. When she first came to prison, women old enough to be her mother told her she was cute and promised to take care of her. “They rub on you and stuff, I can’t stand it,” she said. In the seven months before her 18th birthday, prison records show that Jamie was housed with at least three adult cellmates, including one in her 50s who had a history of cocaine possession. Jamie said she was also around adults in the showers and the yard. She had a bunkmate who did drugs she had never been around before, “something you snort.”

In this environment, Jamie found it hard to stay out of trouble. And when trouble came, she didn’t know how to explain herself to the guards. According to Chris Gautz, a spokesman for the Michigan Department of Corrections (MDOC), Jamie “failed in every instance” to meet good-behavior standards that under Michigan law allow certain inmates to have their records scrubbed clean after they serve their sentences. In June 2012, Jamie’s special status was revoked and she was resentenced to up to five years in prison for her original crime.

When this news sank in, Jamie snapped. On June 15, 2012, she started yelling so loud and for so long that a correctional officer complained in the logbook that the noise was giving her a headache. Then she climbed on her sink and threatened to kill herself. A group of officers in gas masks hauled her out of her cell as she begged them to put her down. Chemical gas that had been used to subdue another inmate lingered in the hallway, Jamie later recalled, and she started to cough. The officers pressed a spit guard on her face and fastened straps on her arms and legs and chest, a practice known as five-point restraint. Jamie became more and more distressed, but at no point did the officers attempt to calm her or even explain what they were doing. “[There was] snot coming out of my nose. I’m trying to sit up,” she said. “I’m coughing and crying at the same time, and basically the officer said I spit on her and they still tied me down.” She recalled pleading with the guards, “I’m like only 17, you can’t do this to me.”

After Jamie had been restrained, the logbook shows that she was left tied to a bed for nearly 24 hours. No therapist appears to have visited her during this time. Jamie said that on another occasion, she was restrained for days and urinated on herself. “I’ve had dreams about being held down; nobody can hear me or nothing. It’s terrifying,” she said. The MDOC declined to comment on detailed questions related to her treatment because they concerned “pending litigation” and “personal medical information.”

Jamie had never attempted suicide until she went to prison and her fellow inmates taught her how to cut herself. Over the course of several weeks in June, according to the prison log, she tried to hang herself with socks tied around her neck, to cut herself with wall scrapings and rocks and a comb, to eat paint chips off her door, and to scratch a wound on her arm with empty mayonnaise packets. She told a staff member she wanted her arm to get infected, amputated, and sent to her parents.

The treatment of kids in adult lockups recently received a rare burst of attention with the suicide of Kalief Browder on June 8 of this year. Browder was sent to the jail on Rikers Island at the age of 16 after being accused of stealing a backpack. During the three years he spent there before the charges were thrown out, he was brutally assaulted by both inmates and guards and spent about two years in solitary confinement. His case has drawn attention to what the Justice Department called a “dangerous place for adolescents” with a “pervasive climate of fear.” But the problem runs far deeper than one jail gone rogue.

In the course of reporting on a lawsuit against the Michigan prison system, I obtained a series of videos depicting the treatment of underage inmates in adult facilities, as well as hundreds of prison documents through Freedom of Information Act (FOIA) requests and other sources. (Jamie is a plaintiff in the lawsuit.) These materials show under-18-year-olds being restrained, held in solitary confinement, forcibly extracted from their cells, tasered, and allegedly sexually assaulted. Some of these incidents would not violate any official rulebook, but are simply accepted practices inside adult correctional institutions.

In 1822, when prison reformers in New York proposed the nation’s first juvenile institution, they saw the need to keep children separate from adults as “too obvious to require any argument.” The juvenile justice system was founded on the idea that young people are capable of change, and so society has a responsibility to help them overcome early mistakes in life. More recent science has only confirmed this principle. Because adolescents’ brains are still developing, their patterns of behavior not yet fixed, they have a far better chance of being rehabilitated than adults. And yet this potential is lost in prisons and jails, which barely recognize any distinction between adults and minors. Amy Fettig, senior counsel for the American Civil Liberties Union’s National Prison Project, said, “The adult system is not designed in any way, shape or form to treat children, to rehabilitate children, or to recognize that children are different than adults.”

Read the rest of the exposé, originally published by The Huffington Post, here.

« Previous: How Pixar’s ‘Inside Out’ Gets One Thing Deeply Wrong
Next: Specifying the CORE Network Supporting Episodic Simulation and Episodic Memory by Activation Likelihood Estimation »