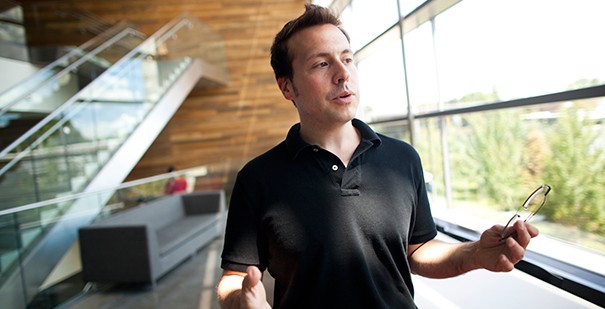 CLBB Faculty Member Josh Buckholtz is the lead author of a new, pioneering study revealing insights into how humans make decisions about punishment and process blameworthiness. This study has important implications for the field of law and neuroscience, and was made possible in part by support from the Center for Law, Brain & Behavior. Below is an article describing the findings.

It’s a question most attorneys wish they could answer: How and why do judges and juries arrive at their decisions?

The answer, according to Joshua Buckholtz, may lie in the way our brains are wired.

A new study co-authored by Buckholtz, an assistant professor of psychology at Harvard, René Marois, professor and chair of psychology at Vanderbilt University, and colleagues explains how a brain region called the dorsolateral prefrontal cortex (DLPFC) coordinates third-party punishment decisions of the type made by judges and juries. The study is described in a paper published recently in the journal Neuron.

“Third-party punishment is the cornerstone of all modern systems of justice, and this study suggests that our ability to make these types of decisions originates in a very basic form of information processing that is not specific to social decision-making at all,” Buckholtz said. “We think that this low-level, domain-general process of information integration forms a foundation for bootstrapping higher-order cognitive and social processes.”

For Buckholtz and Marois, the new paper represents the culmination of more than seven years of work.

“We were able to significantly change the chain of decision-making and reduce punishment for crimes without affecting blameworthiness,” said Marois, co-senior author of the study. “This strengthens evidence that the dorsolateral prefrontal cortex integrates information from other parts of the brain to determine punishment and shows a clear neural dissociation between punishment decisions and moral-responsibility judgments.”

While still a graduate student at Vanderbilt, Buckholtz and Marois published the first study of the neural mechanisms that underlie such third-party punishment decisions, and continued to explore those mechanisms in later studies.

But while those earlier papers showed that dorsolateral prefrontal cortex activity was correlated with punishment behavior, they weren’t able to pin down a causal role, or explain exactly what that brain region did to support these decisions.

“It wasn’t entirely clear. Was this region corresponding to an evaluation of the mental state, or blameworthiness, of the perpetrator, or was it performing some other function? Was it assessing causal responsibility in a more general sense?” Buckholtz asked. “In this paper, we tried to develop a way to selectively map the role of this region to a more specific process and exclude alternative hypotheses.”

To do that, Buckholtz, Marois, and colleagues turned to transcranial magnetic stimulation (TMS), a non-invasive technique that uses powerful electromagnets to reversibly interrupt brain information processing.

As part of the study, Buckholtz and colleagues asked volunteers to read a series of scenarios that described a protagonist committing crimes ranging from simple theft to rape and murder. Each scenario varied by how morally responsible the perpetrator was for his or her actions and the degree of harm caused. In separate sessions, participants estimated perpetrators’ level of blameworthiness for each crime, and decided how much punishment they should face while researchers stimulated the brain region using the transcranial magnetic method.

“What we show is that when you disrupt DLPFC activity, it doesn’t change the way they evaluate blameworthiness, but it does reduce the punishments they assign to morally responsible agents” Buckholtz said.

The team was able to confirm those findings using functional MRI, and additionally was able to show that the dorsolateral prefrontal cortex was only sensitive to moral responsibility when making punishment (but not blameworthiness) decisions. This supported the idea that the brain region was not simply registering the causal responsibility of an action. Still, it didn’t answer what the region was actually doing during punishment decisions.

“There had been some suggestion by others that DLPFC was important for inhibiting self-interested responses during punishment. That idea wasn’t consistent with our prior data, which led us to propose a different model,” Buckholtz said. “What this region is really good at — and it’s good at it regardless of the type of decision being made — is integrating information. In particular, punishment decisions require an integration of the culpability of a perpetrator for a wrongful act with the amount of harm they actually caused by the act.”

In a previous study led by co-author Michael Treadway, now at Emory University, the authors showed that other brain regions are principally responsible for representing culpability and harm, and these areas pass this information to the prefrontal cortex when it comes time to make a decision.

Using statistical models, the team showed that, under normal conditions, the impact of a perpetrator’s culpability on punishment decisions is negatively correlated with the impact of information about the amount of harm caused.

“It makes people rely more heavily on harm information and less heavily on culpability information,” Buckholtz explained. “Given the fact that, overall, TMS reduces punishment, that seemed counterintuitive to us at first. When we looked at the type of crimes this was affecting, we found it was mostly mid-range harms, like property crime and assaults. In such cases, the harm is relatively mild, but the person committing the crime had the intent to do much worse.”

As an example, Buckholtz cited the case of an assault that results in a broken arm. If one focuses on the perpetrator’s culpability, it’s easy to imagine that the assailant intended to do much more damage. In such an instance, focusing on the intent will lead to higher punishment than if one gives more weight to the actual amount of harm.

The finding that a short dose of magnetic stimulation changes punishment decisions is sure to be of interest to those in the legal field. But not so fast, said Buckholtz. “Any suggestion that there are real-world applications for this work is wildly overblown. The magnitude of the TMS effect is quite modest, and our experiment does not replicate the conditions under which people make decisions in trial courts. The value of this study is in revealing basic mechanisms that the brain uses to render these decisions. TMS has no place in the legal system.”

This study was made possible through support from the Research Network on Law and Neuroscience, supported by the John D. and Catherine T. MacArthur Foundation, which fosters research collaboration between neuroscientists and legal scholars; the National Institute of Mental Health; the National Institute on Drug Abuse; the Sloan Foundation; the Brain & Behavior Research Foundation; and the Massachusetts General Hospital Center for Law, Brain, and Behavior.