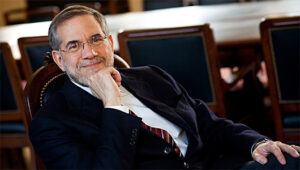 Steven E. Hyman, MD, is Harvard University Distinguished Service Professor of Stem Cell and Regenerative Biology and a Core Institute Member of the Broad Institute of Harvard and MIT where he directs the Stanley Center for Psychiatric Research. From 2001 to 2011 Hyman served as Provost of Harvard University, the university’s chief academic officer where he had a special focus on building cross-disciplinary and cross-institutional collaborations in the humanities, sciences, and engineering. From 1996 to 2001, he served as Director of the U.S. National Institute of Mental Health (NIMH) where he invested in neuroscience and emerging genomic technologies and initiated a series of large practical clinical trials to inform practice. He has served as Editor of the Annual Review of Neuroscience (2002-2016), founding President of the International Neuroethics Society (2008-2013), President of the Society for Neuroscience (2015), and President of the American College of Neuropsychopharmacology (2018). He is a fellow of the American Academy of Arts and Sciences, a fellow of the American Association for the Advancement of Science, and a member of the National Academy of Medicine where he serves as a member of the Forum on Neuroscience and Nervous System Disorders (chair 2012-2018), which brings together industry, government, foundations, patient groups, and academia. Hyman is Board Chair of the Charles A. Dana Foundation (NY), and a Board member of the Charles H. Revson Foundation (NY), the Wyss Center for Bio and Neuroengineering (Geneva, Switzerland), and the International Neuroethics Society. He received his BA, summa cum laude, from Yale College, an MA from the University of Cambridge, which he attended as a Mellon fellow studying History and Philosophy of Science, and an MD, cum laude, from Harvard Medical School.