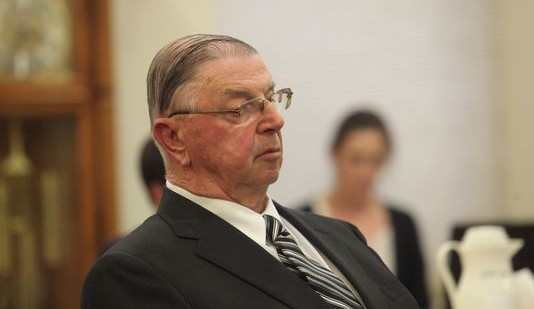 After a four-year battle with Alzheimer’s, Donna Lou Rayhons died in a nursing home in August, just four days shy of her 79th birthday. A week later, Henry Rayhons was arrested and charged with sexual abuse. State prosecutors accused him of having sex with his wife while she was incapacitated by dementia.

Rayhons’s trial, which begins Wednesday, is a rare and possibly unprecedented examination of a little-explored aspect of consent. While much of the discussion about rape these days swirls around the influence of drugs, alcohol and the culture on college campuses, the Rayhons case asks a much different question: When is a previously consenting spouse suffering from dementia no longer able to say yes to sex?

Katherine C. Pearson, who teaches and writes about elder law at Penn State’s Dickinson School of Law, told Bloomberg News that this is the first case of its kind she’s seen in more than 20 years of working in the field.

“This is maybe the last great frontier of questions about capacity and dementia,” she said. “… Any partner in a marriage has the right to say no. What we haven’t completely understood is, as in this case, at what point in dementia do you lose the right to say yes?”

Friends and family say that Donna Lou and Henry Rayhons, a member of the Iowa House of Representatives from 1997 until this year, were besotted with one another throughout their relationship. She often accompanied him to the state Capitol in Des Moines. He bought her dresses and acquired a bee suit so he could join her in her beekeeping.

“He treated her like a queen,” Charity McCauley Andeweg, who clerked for Rayhons, told Bloomberg.

But a few years into their marriage, Donna was diagnosed with early-onset Alzheimer’s. She suffered headaches and forgetfulness, drove on the wrong side of the road and once put a single sock into the dryer instead of a full load of laundry, according to Bloomberg.

In March of last year, Donna’s daughter Linda Dunshee took her mother out to lunch. Beneath her winter coat and blazer, Donna was wearing only a sleep teddy that left her breasts exposed. Later, Donna put her hands in the toilet bowl in the restaurant bathroom, Dunshee told a state investigator.

On March 29, Donna was moved to Concord Care Center in Garner, Iowa, a five-minute drive from her home with Rayhons. Rayhons reportedly resisted the move and clashed with Donna’s daughters — both from her first marriage — over how she should be cared for at the facility.

In May, Dunshee and Donna’s other daughter, Suzan Brunes, met with Concord staff and drew up a care plan for Donna, according to a state affidavit. At the meeting, the women and doctors concluded that Donna was no longer able to consent to sex, a fact Rayhons was informed of.

But a week later, on May 23, surveillance video showed Rayhons spending about 30 minutes in his wife’s room. When he left, he was holding her underwear, which he dropped into a laundry bag in the hallway.

Donna’s roommate told nursing home staff that Rayhons had come into the room and closed a privacy curtain around his wife’s bed. She then heard noises indicating that Rayhons was having sex with Donna, the affidavit said.

That night, Brunes took Donna to the hospital for a rape test, Bloomberg reported. Her underwear and bedding were sent to a crime lab for an examination.

Shortly after, a judge approved Brunes’s application to become her mother’s temporary guardian, which cited issues between Rayhons, Concord staff and Donna’s other family members. Around the same time, a state investigator showed up at Rayhons’s home to interview him about the alleged assault. In the interview, Rayhons admitted to having “sexual contact” with his wife on May 23, according to the state affidavit.

Donna died just two months later, and Rayhons was arrested a week after that. Shortly before the charges were filed, Rayhons withdrew from a race to serve a 10th term as state representative for Iowa’s 8th District.

Rayhons’s prominence in the area prompted the Iowa attorney general’s office to seek to move the trial out of Hancock County, where prosecutors argued they would not be able to find an impartial jury after the charges had been covered so extensively in local news. A judge denied the request.

Now, as the case heads to trial, prosecutors will have to convince the jury on two points: First, that Rayhons had sex with Donna while she was at Concord Care, and second, that Donna was not capable of consenting to it.

If Rayhons is proved to have had sex with Donna, Iowa sexual assault law is vague about how the case should be treated. The state outlawed non-consensual sex between a husband and wife 25 years ago, Elizabeth Barnhill, executive director of the Iowa Coalition Against Sexual Assault, told the Iowa City Press Citizen. State law also defines sex with a person suffering from a “mental defect or incapacity” as sexual abuse but is not explicit about what is meant by the term “mental defect.”

Meanwhile, Alzheimer’s experts differ on whether the disease really does preclude people from being able to give consent. Elizabeth Edgerly, a clinical psychologist who serves as chief program officer for the nonprofit Alzheimer’s Association, told the AP it can be hard to determine capacity in cases of dementia.

“Is the person capable of saying no if they don’t want to do something? That’s one of the biggest pieces,” she said.

Edgerly added that physical closeness with loved ones can often be helpful to people with the disease.

According to Bloomberg, in the months after moving to Concord Care, Donna fared poorly on the Brief Interview for Mental Status, a cognitive test that measures dementia by asking patients a series of memory questions. On a May 13 test, just 10 days before the alleged assault, she got a score of zero on the BIMS test.

But Douglas Wornell, a Tacoma, Wash., geriatric psychiatrist and author of the book “Sexuality and Dementia,” told Bloomberg it was “naïve” to conclude that Donna’s memory loss indicates she was incapable to knowing whether she wanted to have sex, which is “along the order of knowing you want some food,” he said.

A statement from Rayhons’s family released after criminal charges were filed against him dismisses the notion that any contact between Rayhons and his wife could be considered rape.

“Donna’s location did not change Dad’s love for Donna nor her love for him. It did not change their marriage relationship. And so he continued to have contact with his spouse in the nursing home; who among us would not?” it read. “… Accusing a spouse of a crime for continuing a relationship with his spouse in a nursing home seems to us to be incredibly illogical and unnatural, as well as incredibly hurtful.”

Post Views: 16
« Previous: When Eyewitness Testimony Goes Horribly Wrong
Next: WATCH – “Moral Decisions in the Law: What’s the Brain Got to Do with It?” »