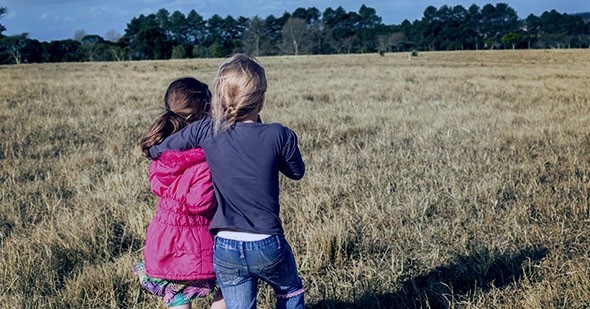 Last week Waukesha County Circuit Judge Michael Bohren ruled that two Wisconsin teenagers will have to stand trial as adults for attempted homicide. The two girls—both 12 at the time—stabbed a 12-year-old classmate 19 times last year. They said they did so to mollify a cult fan fiction character called Slender Man, who is about as creepy an imaginary figure as there can be. Attorneys for the two girls were hoping to have the charges reduced so they could be tried in juvenile court. But Judge Bohren found probable cause for prosecutors to bring first-degree attempted homicide charges, which, under Wisconsin law, must be tried in adult court. The girls will have another chance to seek to be tried as juveniles later this spring.

The girls, now 12 and 13, were arrested on May 31, 2014, after allegedly elaborately planning the murder of their friend, Payton Leutner. (Slate isn’t naming the defendants, who may still be moved to juvenile court, where their names would not be public.) The girls admitted stabbing Leutner repeatedly, piercing her liver, pancreas, and stomach, and almost severing an artery to her heart, then leaving her to die in the woods. Leutner managed to crawl to a nearby road, where a cyclist found her. She was rushed to the hospital and survived. Police captured the two perpetrators a few hours later as they were attempting to walk to Wisconsin’s Nicolet National Forest, where they believed Slender Man lived in his mansion, so they could join him there.

Now I confess here that I am not as up on my Slender Man as I should be, and also that the scariest thing I thought about as a 12-year-old was probably Chachi. But the conversation around the Slender Man events of last year raised important questions about preteens, violence, the Internet, and the lines between reality and imagination. This terrific piece by Abigail Jones from last summer argues that we have an outsize fascination with young murderesses precisely because they are so statistically rare. Jones also argues that unlike adults, young people are more easily rehabilitated and treated, and—if viewed by the justice system as though they are fixable—apt to go on to lead relatively normal lives.

On one level it’s easy to say that the girls in this case are pretty much textbook arguments for why children cannot be treated like adults in our legal system. They are, if you look at their conduct, a terrifying blend of cold-blooded predators and reality-challenged toddlers. If you know a preteen yourself, this might sound rather familiar. But the criminal justice system tends to find the combination of these two attitudes extra-terrifying.

One defendant believes in unicorns and says she can communicate with Lord Voldemort and the Teenage Mutant Ninja Turtles.

If ever there were children disconnected from reality, the girls would be them: According to the criminal complaint, the two discovered Slender Man on Creepypasta Wiki, a website dedicated to Internet horror stories, and they totally believed he was a real thing. In order to become Slender Man “proxies,” they needed to kill someone. After stabbing Leutner, they headed to the forest, where they believed— à la the Brothers Grimm—that they could hang out happily with Slender Man in his mansion. After they were arrested, one of the girls told police that Slender Man was “a tall, faceless man who preys on children,” who “watches you.” She added, “I’ve never seen him. He’s everywhere.”

But, according to the complaint, the girls’ complete dissociation from reality was blended with a blood-curdling lack of remorse: “I believe it’s ending a life, and I regret it,” the other girl told the cops. “The bad part of me wanted her to die; the good part of me wanted her to live.” The first girl was just as careless: When asked why they were going to stab their friend, she stated, “It seemed necessary.” When asked what she was trying to do when she stabbed the victim, she stated, “I may as well just say it. Kill her.” Yet more chilling: “It was weird that I didn’t feel remorse.”

Last July one girl was found incompetent to stand trial by doctors who said that when they interviewed her, it was clear, as Newsweek recounted, that she “believes in unicorns, says she can communicate with Lord Voldemort (of Harry Potter fame) and the Teenage Mutant Ninja Turtles, and thinks she has ‘Vulcan mind control.’ ” She is terrified of Slender Man, even as she idolizes him and fears that if she angers him, he will hurt her family. One doctor said, “She needs to grow up.” But she was later deemed competent following treatment.

In one sense, the judge was limited in his choices. Wisconsin law provides that anyone older than 10 charged with first-degree homicide, including attempted first-degree homicide, must be tried in adult criminal court. If convicted, each girl faces up to 65 years in prison. If they are tried as juveniles, the girls could be held in a secure facility until they’re 25. The defense team tried to push for attempted second-degree murder charges by arguing that the girls believed they were protecting their families from Slender Man’s wrath. Judge Bohren, after a lengthy recitation of the statutes by which he was bound, rejected the self-defense claims last week, noting that the girls seemed motivated by a desire to live in Slender Man’s mansion and show the world that he was real—motivations that had nothing to do with self-defense. Prosecutors argued that the self-confessed premeditation—the girls had been planning the attack since December 2013—and their selfish motives for the killing demanded the first-degree charge.

It almost goes without saying that in the adult system the goals are principally punitive and retributive. For juveniles, the system is geared toward treatment and rehabilitation.

The court did order what’s called a reverse-waiver hearing for this spring, at which each of the two girls’ defense teams will again try to persuade the judge that they should be tried in juvenile court. According to the Milwaukee Journal-Sentinel, to have the girls waived into juvenile court the defense “would have to convince Bohren of three things: that the girls could not receive adequate treatment in the criminal justice system, that the move would not ‘depreciate the seriousness of the offense’ and that keeping the case in adult court is not necessary to deter other juveniles from similar offenses.”

In a long line of recent cases, the Supreme Court has used brain science to argue that teenagers are simply not like you and me (unless, of course, you are a teenager). It started in 2005, with Roper v. Simmons, when the court held that executing juveniles who commit crimes before the age of 18 is a violation of the Eighth Amendment, in part because the teenage brain is not yet fully developed. As Justice Anthony Kennedy wrote, “as any parent knows and as the scientific and sociological studies respondent and his amici cite tend to confirm, ‘[a] lack of maturity and an underdeveloped sense of responsibility are found in youth more often than in adults and are more understandable among the young.’ ” Five years later, in Graham v. Florida, the court held that the Eighth Amendment bars the sentence of life without parole for juveniles convicted of crimes other than murder. Again Kennedy relied on brain science to hold that “developments in psychology and brain science continue to show fundamental differences between juvenile and adult minds.” In 2011, ruling in a Miranda-warning case called J.D.B. v. North Carolina, the court determined that youth changes the calculus in any inquiry about whether defendants were properly advised of their rights. And in 2012, in another case dealing with sentences of life without parole, called Miller v. Alabama, Justice Elena Kagan, writing for the majority, observed that the “evidence presented to us … indicates that the science and social science” behind Roper and Graham’s conclusions on juvenile development “have become even stronger.” She added that “distinctive attributes of youth diminish the penological justifications” (including retribution, deterrence, incapacitation, and rehabilitation) for harsh sentences. Such attributes, she noted, include juvenile defendants’ “immaturity, recklessness, and impetuosity,” as well as their unique “capacity for change.”

It seems strange that we have come such a long way in terms of understanding the brain science of teenagers and applying those lessons in court, and yet states such as Wisconsin will tie a judge’s hands when it comes to trying these defendants as what they are: juveniles. In the 1980s and ’90s, the criminal justice system changed in fear of largely imaginary teen super-predators; this fear led many states to revise their juvenile justice laws in extremely draconian ways. But putting aside—if you can—the horrific nature of this crime, it’s difficult to imagine that two girls who can’t vote, can’t drive, can’t drink, and at the time of the crime didn’t even need to pay full price for movie tickets or take their shoes off to go through airport security are somehow fit to be tried as grown-ups. As Jessica Henry, chairwoman of justice studies at Montclair State University, concludes, by treating children as adults, “a judge engages in a legal fiction.” James Alan Fox, who teaches criminology at Northeastern University, argues, “Committing a crime ordered by some mythical miscreant reflects the kind of immature thinking that is typical of youngsters. Although they may offend like adults, they reason like children.”

We know that kids treated as adults fare poorly in prison, are more likely to recidivate, and are less likely to have any meaningful chance at rehabilitation. So, it’s fair to say, we treat them as adults for our own benefit, not theirs.

We want to brutally and severely punish the Slender Man teens precisely because they make us feel like the world is full of vicious monsters. We may also think we can make ourselves and our families safer by effectively ending these two lives. Of course this is the same sort of logic these two disturbed girls applied to Slender Man himself—the idea that they could make their worlds safer if only a life was ended. This is the logic of magical thinking enacted with horrific real-world consequences. It would be ironic in the extreme if we used the criminal justice system to apply precisely this kind of upside-down logic to these two girls; the fantasy that monsters exist, lives are expendable, and reckless acts make us safer.

Read the original piece on Slate.